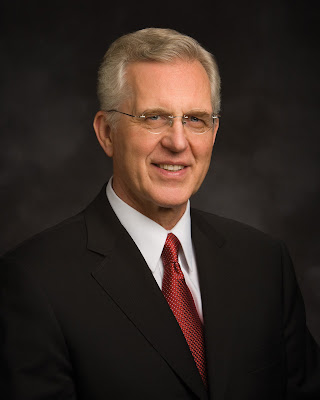 Elder D. Todd Christofferson had most recently been serving as a member of the Presidency of the Seventy with supervisory responsibility for the North America Northwest and North America West Areas. He previously had supervisory responsibility for the North America Southeast Area and has served as executive director of the Family and Church History Department and as president of the Mexico South Area of the Church.
Born in Pleasant Grove, Utah, he graduated from high school in New Jersey, earned his bachelor’s degree from Brigham Young University, where he was an Edwin S. Hinckley Scholar, and his law degree from Duke University. He practiced law in Washington, D.C. and has been a senior vice president and associate general counsel for major banking institutions.
He said that he felt great desire, anxiety and hope with respect to serving others in the spirit of Christ’s admonition to Peter to “feed my sheep” and “feed my lambs.”
At the April conference of The Church of Jesus Christ of Latter-day Saints the following were also called.
Elder L. Whitney Clayton was named to replace Elder Christofferson as a member of the Presidency of the Seventy. Elder Clayton has been a member of the First Quorum of the Seventy since 31 March, 2001.
His professional career was in law where he was a business litigation attorney with a California law firm. He earned a bachelor’s degree in finance at the University of Utah and a law degree at the University of the Pacific.
He has served the Church in many positions including regional representative, mission president’s counselor, stake high councilor and bishop.
Elder Clayton was born in Salt Lake City, Utah in 1950. He married Kathy Ann Kipp on August 9, 1973 in the Salt Lake Temple. They are parents of seven children.
Fifteen new general authorities were also sustained to serve in the First and Second Quorums of the Seventy. Called to serve as members of the First Quorum of the Seventy are: Elder Marcos A. Aidukaitis, Porto Alegre, Brazil; Elder Gérald Caussé, Paris, France; Elder Lawrence E. Corbridge, Sandy, Utah; Elder Eduardo Gavarret, Lima, Peru; Elder Carlos A. Godoy, Barueri, Brazil; Elder James J. Hamula, Mesa, Arizona; Elder Allan F. Packer, Sandy, Utah; Elder Kevin W. Pearson, Salt Lake City, Utah; Elder Rafael E. Pino, Miranda, Venezuela; Elder Gary E. Stevenson, Providence, Utah; Elder José A. Teixeira, Vila Real, Portugal; Elder F. Michael Watson, Bountiful, Utah; and Elder Jorge F. Zeballos, Concepcion, Chile.
Elder Tad R. Callister, Glendale, California and Elder Kent D. Watson, Cedar City, Utah were called as members of the Second Quorum of the Seventy.
Additionally, 38 Area Seventies have been called.
Elaine S. Dalton succeeds Susan W. Tanner as Young Women general president, with Mary N. Cook as first counselor and Ann M. Dibb as second counselor. Sister Dalton had previously served as first counselor and Sister Cook as second counselor in the Young Women general presidency. Sister Dibb had been serving on the Young Women General Board.
Inscribed by Fleeting_Thoughts at Sunday, April 06, 2008

I delighted in the humility and faithfulness of this good man as I listened to his message in General Conference. He is a very loving and thoughtful man.