Wishing the World a Merry Christmas

I hope you all have a wonderful Christmas!

I have always thought of Christmas time, when it has come round, as a good
time; a kind, forgiving, charitable time; the only time I know of, in the long
calendar of the year, when men and women seem by one consent to open their
shut-up hearts freely, and to think of people below them as if they really were
fellow passengers to the grave, and not another race of creatures bound on other
journeys. ~Charles Dickens

Inscribed by Fleeting_Thoughts at Thursday, December 25, 2008 No comments:

I found an interesting article on Crosswalk.com written by a Richard Abanes. It appears the December 13, 2008 article is a regurgitation of an article he wrote in the Summer of 2005. It was an interseting article calling for more civil dialogue, no need for shouting matches. He ends the article quoting Daniel C. Peterson, who in 2003 said: “[Some] take this as just, ‘it’s a competition, you can score points.’ You know, you can ‘win on this’—gratify your ego by defeating somebody on that point or something. That’s not what it’s really about. Resist that temptation.” There is only one other thing I would add to his list, an evangelical lowers their credibility when they try to sell their pejorative publications in the middle of their articles/discussions. You can read his full article here.

The California Prop 8 issue continues to be big news, I find it interesting that the LGBT groups in San Francisco are attacking the evangelical groups that are defending the Mormons. (I am actually surprised at the number of LGBT news sites that have plastered their articles with Mormon bashing news.) Overall authors are drudging up the same old statements to make Mormons seem crazy. In fact, one newspaper writer wrote up about some quote by a Mormon that people lived on the Moon. Of course, it was the New York Times that years before a Mormon said it, proclaimed that one day we would meet the people on the moon. So why doesn't the newspaper writer take any heat for being part of a crazy group that believed people lived on the Moon? Anyway, the PoliGazette does an interesting job disecting how newspaper writers propogate misconceptions about Mormons.

This was a kind of funny snippet from a newspaper in Arizona called The Daily Courier: "Dec. 8, 1958 A group of us has been studying various religions. Out here in the West we find Mormonism particularly interesting because of their zeal and growth."

Another humorous commentary about Christian music and Mormonism can be found at Belief.net In fact, I couldn't help but chuckle as I read about the "Jesus fish stamp of approval" when choosing music. Due to a misunderstanding about a joke the author told about "You might be a christian music fan if...", the author has to explain the joke to the reader. It's a fun read click here.

So this band called the "Killers" has an interesting personality in Brandon Flowers. This article comes from the UK and can be found here.
Inscribed by Fleeting_Thoughts at Tuesday, December 16, 2008 2 comments:

I just finished listening to Music and the Spoken Word with the Mormon Tabernacle Choir this morning. The Mormon Tabernacle Choir has been performing a weekly radio broadcast since 1929. I was touched by the beauty, spiritual message expressed. Mr. Brian Stokes Mitchell performed with the choir and I must say he was amazing. They performed an English carol and Mr. Mitchell sang for each character.

The song is sung by a christian music group and is a beautiful rendition of the song. The video uses a lot of film from movies made by the LDS Church about Jesus' life.

TICKETS ARE REQUIRED: The live broadcast, featuring the Mormon Tabernacle Choir and Orchestra at Temple Square, takes place every Sunday morning at 9:30 a.m. This week's "Christmas" program includes, singer Brian Stokes Mitchell and actor Edward Herrnamm. Doors open for the broadcast at 8:30 a.m. Guests should be seated by 9:15 a.m., when the doors are closed. Admission is free and limited to eight years of age and older.
Inscribed by Fleeting_Thoughts at Sunday, December 14, 2008 No comments:

Elder Joseph B. Wirthlin, the oldest living apostle of The Church of Jesus Christ of Latter-day Saints, died Monday night, at age 91. 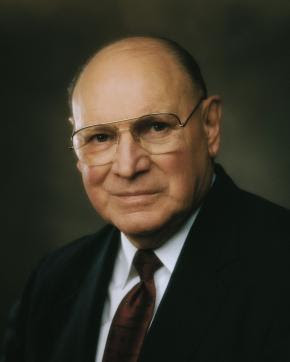 Elder Wirthlin had gone to bed at his Salt Lake City home, and died peacefully at about 11:30 p.m. of causes incident to age. His oldest daughter, Jane Wirthlin Parker, was present. A member of the family had been staying and caring for Elder Wirthlin, whose wife, Elisa Young Rogers Wirthlin, died in 2006. 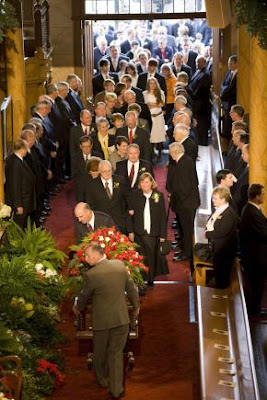 He had continued to work at his office right up until the Thanksgiving holiday.

Funeral services will be held at noon on Friday, December 5, at the Tabernacle on Temple Square.

Elder Joseph B. Wirthlin was ordained an Apostle of the Church of Jesus Christ of Latter-day Saints on October 9, 1986. He was sustained and set apart as an Assistant to the Council of the Twelve Apostles on April 4, 1975 and served in that capacity until he was called to the First Quorum of the Seventy in April 1976. He was set apart in the Presidency of the First Quorum of the Seventy August 28, 1986, where he was serving when called to be an Apostle.

Elder Wirthlin was born in Salt Lake City on June 11, 1917 to Joseph L. and Madeline Bitner Wirthlin. His Father served as the Presiding Bishop of the Church.
Elder Wirthlin graduated from the University of Utah in Business Administration. He received from Brigham Young University a Doctorate of Christian Service Honoris Causa, April 26, 2001. He is an Eagle Scout. He was active in athletics in high school and played football (running back) at the University of Utah.
Before his call as a General Authority, he was a prominent business leader in Salt Lake City. He was also president of a trade association in Utah.
Elder Wirthlin served a mission to Germany, Austria, and Switzerland in the late 1930s. Among other positions in the stake and ward auxiliaries, he has served as a counselor in the Bonneville Ward bishopric and as bishop. He was a member of the Bonneville Stake high council and a member of the stake presidency. He served as a counselor in the General Sunday School Presidency until April 1975, when he was called as an Assistant to the Twelve.
He married Elisa Young Rogers May 26, 1941 in the Salt Lake Temple. They are the parents of eight children. Sister Wirthlin passed away on August 16, 2006.

Here is Elder Wirthlin talking about his father.

You can watch the entire funeral services by clicking here.

Inscribed by Fleeting_Thoughts at Tuesday, December 02, 2008 No comments: