Is the Wasatch Front the Mormon Zion? 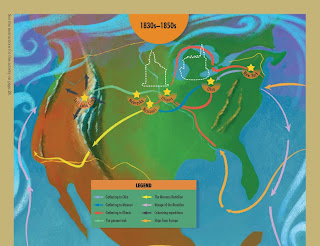 Simplified historical perspective: Joseph Smith, the Mormon Prophet, and his brother Hyrum Smith, the Mormon Patriarch, had been murdered June 27, 1844 while supposedly being protected by the government of Carthage, Illinois. Mormons had been harassed and pushed out of New York, Ohio, Missouri, and now Illinois. With their Prophet dead and understanding that the government of the United States at the time did not uphold it's constitution or bill of rights with respect to freedom of religion, Mormon leader Brigham Young January 14, 1847 (just two and a half years after Joseph Smith's murder) issued "the word and will of the Lord" found in Doctrine and Covenants Section 136. The section describes the preparations for the westward migration that ultimately took the Mormons out of the United States and into the territory of Mexico in 1847. Incidentally, most maps of the United States in 1847 go no further west than Iowa, Missouri, Arkansas, and Louisiana. It should also be noted that the concept of Manifest Destiny had only been spoken of by John L. O'Sullivan in 1845. President James K. Polk, along with congress, precipitated the Mexican-American war that in 1848 brought the Salt Lake Valley back into the United States as a territory.

Brigham Young in Section 136 of the Doctrine and Covenants provides a lot of organizational information for the westward migration of the Mormons and specifically calls some of his people "pioneers" (verse 7). The most telling item with respect to the Zion is found in verse 10 that states: "Let every man use all his influence and property to remove this people to the place where the Lord shall locate a stake of Zion" (emphasize added). In January of 1847 the Mormons where off to create a stake of Zion, not create the Zion. On July 24, 1847 the Mormons first entered the Salt Lake Valley and Brigham Young declared, "This is the right place." Utah as a state still celebrates July 24th as Pioneer Day. The Days of '47 website describes a yearly theme.

Once the Mormons began arriving, Brigham Young would send out groups of pioneers to settle surrounding areas (in other words, to build more stakes of Zion). I don't think the Wasatch Front is the Zion, so members of the Church of Jesus Christ of Latter-day Saints should focus on Zion as the pure in heart, those that fear not thine enemies; for they shall not have power to stop my work, keep your pledges one with another, don't swear, cease to fight and gossip, cease to be drunk and use edifying language, return things you borrow, be a good steward of your materials possessions, sing, dance, and pray, and finally, you're being prepared to receive the glory of Zion.

Where is Zion for you? Is the Wasatch Front a special kind of Zion?
Inscribed by Fleeting_Thoughts at Wednesday, April 22, 2009

I really enjoyed reading this information. Your points are valid and it is fascinating to see the cherished misconceptions of a people flourish among so many. It is interesting to note other misunderstandings among the LDS people. Some of these are to be found even in our Hymn Books. "There is a green hill far away.. where our dear Lord was crucified..." It is more likely that the Hill was barren and rocky ground. It is relaxing to picture a beautiful green hill, covered with a well maintained lawn. However, the truth about the scene may be very different from what some picture.

One great thing about these misconceptions, is the fact that they may not distract us to any great degree from those things which are central to the most important part of our message to the world. The Church of Jesus Christ is the Lord’s Kingdom on earth. This Church is the only church that is lead by a Presiding Prophet who has both that authority and power of God to speak for him to all of his children upon the earth.