This story was written way back in 1998 and I just stumpled upon it. My thanks to Larry Day who wrote about the story in Meridian Magazine with the title Havana Saint. 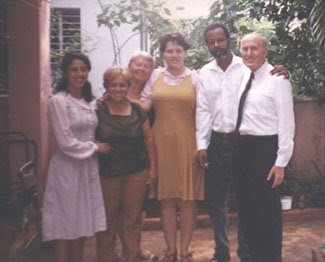 Dr. Verrier is second from the right.
It was in 1991 during a new assignment to West Africa--Guinea-Bissau--that Mormonism entered his life."This is my history, and I want to give a true account," he said."One day when I came to my room in the dormitory, there was a book on my bed."

It was a Portuguese language copy of the Book of Mormon. "The book just appeared there. I think God put it there, because my room and that building were kept closed. There's a lot of wind and dust over there, and we always kept things closed up." Afterward, no one ever approached him about the Church, or mentioned the book to him.

Verrier read the book sporadically, but circumstances seemed to conspire against his studying it closely. Side effects from an anti-malaria medicine affected his eyes. The book was printed in small type and in a language he understood, but which was not his own.When Verrier got back to Havana, he wrote to the LDS Church in Salt City asking them to send him a Spanish version of the Book of Mormon, and other literature about the church.

Nearly a year passed and nothing came.Then one day, Verrier's daughter heard voices outside in the street. The Verriers live on the second floor of a corner building on Calle Sol in Old Havana.A man, with a foreign accent was asking, "Where does Dr. Luis Verrier live?"

Standing on the sidewalk in front of Verrier's house were LDS Bishop Victor Montoya and his wife, Rebecca from Mexico City. They had come to Cuba on vacation, but had been asked to deliver the Book of Mormon Verrier had requested."Señor Victor and Señora Rebecca sat down in my front room and we talked for nearly three hours. I took advantage of them, keeping them so long, but I had so many questions in my mind for which I had no answers."

"That was a marvelous day in my life. I obtained so many answers to questions about the church that I had been inquiring about.

"All the answers to the questions which Señor Victor gave me were answers which I knew deep in my heart were true about the Book of Mormon and the church. These were not the rumors that people had told me about the church."

The Montoyas came back the next day. They were accompanied by a young woman, a 23-year-old Cuban-Ukrainian member of the church named Natalia Vasilievskaya Arias. The five of them talked for hours in Verrier's house and on a long walk through the streets of Havana.

Montoya also brought Verrier a Spanish copy of the book, "Search for Happiness," by LDS Apostle M. Russell Ballard, and a testimonial letter sent by Montoya's brother-in-law in Mexico. When Verrier offered the Montoyas coffee and tea, during their first visit, they declined, and told him about the Word of Wisdom--the LDS health code that prohibits members from using tea, coffee, alcohol and tobacco.

Verrier was a heavy smoker. He also drank quantities of coffee and tea, especially when he was on 24-hour shifts at the hospital.

"At the hospital we all used coffee, tea and cigarettes to keep us awake and functioning, especially on the night shift," he said. Verrier had never used alcohol because of the trauma of his parents' death in an alcohol-related car accident...

Verrier persevered. He quit drinking coffee and tea. He quit smoking cold turkey, and tried faithfully to keep the commandments he'd been taught. As he did, his desire to be baptized became a pulsating need. He said he feared he might die before he could be baptized.

The Montoyas made another visit to Cuba in March of 1997, but Bishop Montoya didn't have approval to perform the baptism. The church was not officially recognized in Cuba, and the political situation between the U.S. and Cuba was tense.

Last January the Cuban government and the Cuban people welcomed the Pope with an outpouring of respect and affection.

The Cuban government let the genie out of the bottle, and Luis Verrier became a beneficiary of its release.

One day last March--Friday the 6th to be exact--Verrier was visiting at his neighbor's house. The phone rang. The call was for Verrier. It was Natalia, his Mormon friend.
"Luis,I have a surprise for you," she said.

Natalia said that Bishop Montoya would come to Verrier's house the next day at around 9 or 10 a.m. ...

"I was awake all night. I just couldn't sleep. I tossed and turned and waited for morning," said Verrier. "All I could think about was that meeting with Victor."

When Montoya arrived at the house he told Verrier that the church had approved the baptism, and proceeded with a baptismal interview. Montoya brought a letter from Elder M. Russell Ballard of the Council of the Twelve.

"The interview went well. There were no problems. I think I had been prepared for a long time. A long time," said Verrier...

Verrier spent another sleepless night, "Thinking and praying and communing with God and Jesus Christ," he said. "I think I felt the way Joseph Smith felt the night he was visited by the Angel Moroni."

Early the next morning Victor took a bus to the Irina Vasilievskaya's house.

The baptismal party consisted of Bishop Montoya and his wife, Rebecca; Irina Vasilievskaya and her daughter Natalia Arias; Marisol Vivo Loza, a woman who was investigating the church; Patricia Wara Mogrovejo Cerruto, an 18-year-old Latter-day Saint from Bolivia, who was in Cuba on a scholarship to study ballet, and Dr. Luis Verrier.

Finally, rounding a curve a long distance from where they had begun, the baptismal party came upon a stone outcrop that jutted into the ocean. Nestled there in the outcrop was a small tidal pool, protected from the crashing waves, and deep enough for a baptism by immersion.

As soon as he saw it, Verrier said, he knew they had found the right place. Dressed in white, the two men stepped down into the water. With the roar of the waves sounding in their ears, and ocean spray splashing over their bodies, Bishop Victor Montoya of Mexico City, Mexico, raised his right hand toward heaven, said a prayer, and baptized Dr. Luis Andre Verrier Almaraz, of Havana, Cuba, a member of the Church of Jesus Christ of Latter-day Saints...

While he was in Africa, Luis became ill, and at the same time became concerned about his little granddaughter. He returned to Cuba to recuperate. That was in January 2000. Coincidentally, or by inspiration, Elder Carl Pratt went to Cuba at the same time. It was then, Luis said, that he received the Melchezdek Priesthood and was ordained an Elder.

I went back to Cuba last December (2001) with my daughter, a Physician, who had spent time as part of her family practice residency in Matanzas. I went to sacrament meeting in Irina and Natasha’s home in La Lisa. An American attorney who was in Cuba for an AMA conference, attended the same morning. There were two elders, a deacon, an investigator at church that morning in the home of Irina and Natasha. It was sunny and bright.
Inscribed by Fleeting_Thoughts at Monday, February 25, 2008

I think that it is so neat to watch the growth of the Church throughout the world. Many of the missionaries who serve at the genisis of these expansions in the Church are years later surprised by jus how many lives they touched.